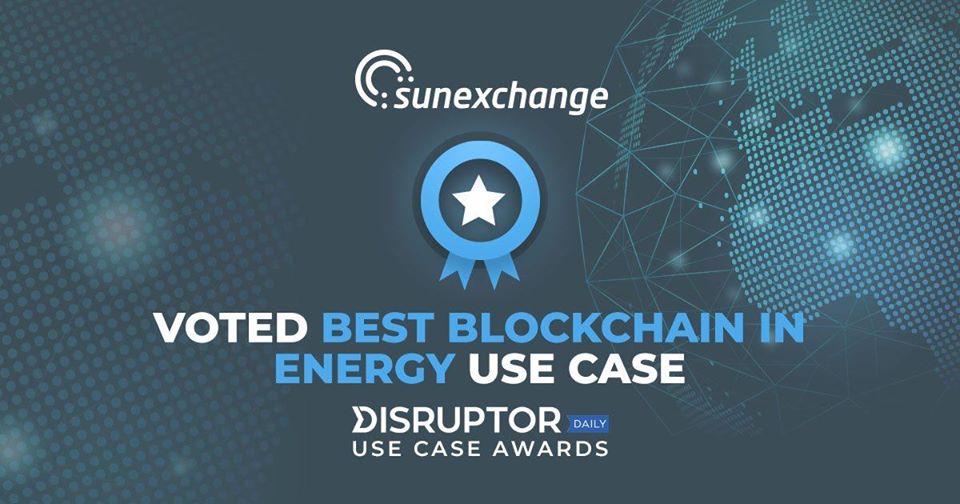 Remember the time The Sun Exchange was nominated for the Disruptor Daily Best Blockchain in Energy Use Case?

As Uprise.Africa,  we’re proud to announce that with your votes, they have won!

This calls for celebration, doesn’t it?

The Sun Exchange has been involved in numerous energy transformation projects to connect the world to the sun.

Voting stations closed on the 11th of October 2019, and with all the voting and vote counts, the results are out and in our favour. The Sun Exchange has been crowned as the most practical blockchain use chain for the energy industry.

The Sun Exchange directly connects organisations in emerging markets wanting to go solar, as well as global individuals who want to invest in solar.

In an interview after being announced as the winner, The CEO and Founder of The Sun Exchange Abe Cambridge narrated his academic background in climate change science – “Through my studies, it became clear that climate change is the most imminent threat to humanity and the only way to transition the world away from fossil fuel was solar power.”

They make clean energy more accessible and affordable to solve traditional finances for organisations such as schools, old age homes, and non-profits.

Six of the 13 solar projects crowdsales Sun Exchange has hosted have been for schools, meaning that those schools have a reduced carbon print, and not only that but reduced costs on energy bills.

Now, imagine with their reduced costs on electricity bills, the same schools can now focus on the purpose which is education, to provide an opportunity for students to learn about innovation and climate leadership.

With the R4 million milestone already been reached, there are 4 days left to reach the R7 million target from the South African public in exchange of 5.22% ownership of the company.

The Sun Exchange is a multi-award winning company to be listed by Fast Company as one of the Top 10 most innovative companies in Africa!

So why not take advantage of the sun and allow it to shine your way? Invest today!

A South African based journalist who is fascinated about storytelling. Although she is new in the industry with less than two years of industry experience, she is excited to learn more. Gloria loves to travel and learn about other cultures. She is currently a full time journalist/creative writer with CMG Marketing Communications t/a CreativeMagic Group.